THE AREA AROUND THE HOTEL


HOW TO REACH US BY CAR:

HOW TO REACH US BY TRAIN: 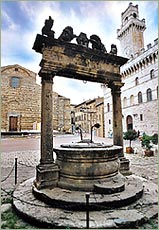 Even today Montepulciano castled on a hill between Valdichiana and Val d'Orcia, it?s presented with the same characteristics when developed like as a medieval village. Montepulciano ancient settlement of the Etruscans and Romans, contest over by the Lords of Siena and Florence in the Renaissance living a moment of great cultural ferment enriched enough until to be called the "Pearl of 500".
In the course of 1400, the effects of the Florentine dominion we have in the political-administrative and in the architectural-urban fields, an example is the arrangement of Piazza Grande and the reorganization of the palace of City Hall by Michelozzo Michelozzi.

The city of Montepulciano, situated on an hill that look far over a green amphitheater, is divided between a number of alleys arranged at different levels in the longitudinal, often narrow, steep, under arches and archway that create an evocative environmental value. 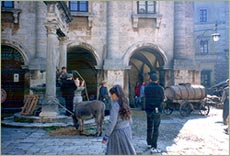 The works of Michelozzo, Antonio da Sangallo the Elder, Vignola, follow each other on the itinerary, from Porta al Prato, the lowest point of the city, to Piazza Grande; Here you will find the Town Hall, the characteristic Pozzo dei Grifi e dei Leoni, the Cathedral and other Renaissance palaces.

Another church to visit is the Sanctuary dedicated to the Madonna di San Biagio, an exemplary construction of the ?500 Tuscan?s built by Antonio da Sangallo the Elder on the ruins of the ancient church of San Biagio.
Montepulciano is also a town with strong cultural activities among which the Cantiere Internazionale d?Arte and the popular representation of Bruscello.
Another event, which goes back to medieval history, is the "Bravio delle Botti" an historical re-enactment of the battle between the 8 districts in which the city is divided, held in Montepulciano on the last Sunday of August.

Notable is, ultimately, the prestige of the wines of Montepulciano: Rosso d.o.c., but especially the Noble, that it was the first Italian wine to have the certification d.o.c.g.

Terme di Montepulciano are located in the small village of S. Albino, a few hundred meters from our hotel. The spa uses mineral water sulphurous salsobromoiodica bicarbonate calcium-magnesium, particularly rich in carbon dioxide, captured at 132m. depth and conveyed to the care departments without being exposed to contact with air, so as to ensure the preservation of natural therapeutic qualities of sulfur, which, especially in a nascent state, carries out an activity antiseptic, catarrhal, antispasmodic and anti-allergic. The healing properties of these waters are particularly suitable for the treatment of respiratory disorders, otorhinolaryngology, the skin and the female organs. Specialized centers for the diagnosis and treatment of deafness and lung diseases, such as asthma, bronchitis and emphysema are in addition to the new vascular rehabilitation centers, orthopedic and rheumatology. In addition, the Terme di Montepulciano have a new fitness and wellness center where treatments include massages, mud baths, hydro massage, atomized showers, treatments for cellulite, and gymnastics training, favored by carbon dioxide contained in the waters,will help you find the wellness.

The thermal baths of San Casciano, known as "Centro Termale Fonteverde", as well as mud baths and inhalations, offers innovative aesthetic treatments for the body and for the face designed by the team of medical and scientific of the Centre. The pool, fed by thermal water, is equipped with hydro massage like natural waterfall, hydro massage jet under "I colli di Cigno" and submerged benches for a maximum comfort.In addition, all products of the cosmetic line "Fonteverde" contain "Fleur Thermale", a complex of the thermal substances essential for the health and beauty of skin.

The Chianciano Terme, born over the three sources Santa, Fucoli and Sillene, in addition to traditional therapies that made them famous as that hydropinic for liver care, delivered in beautiful parks rich in Mediterranean vegetation, the Carbonated baths and mud baths, provides a modern Idrofisiokinesiterapia center and physical therapy, a gym for active and passive gymnastics, an Aesthetic Medicine Center and angiology, a mud therapy department for treatment of rheumatic diseases and Stress Center.

Bagni San Filippo, fed by sulphurous-sulphate-bicarbonate waters are used to treat rheumatic diseases, dermatology, ear,throat and respiratory nose. The thermal swimming pool in beautiful hidden location between the green and lime deposits, is equipped with a solarium and waterfalls for a beneficial natural bath. 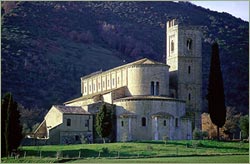 Montalcino, situated on the last hills of the Ombrone Valley, is the world-famous center for the production of the renowned wine "Brunello". Important notice of its glorious past are the Town Hall and the mighty Rocca Turrita, both of the fourteenth century. Inside the Diocesan Museum you will find many works of Senese painting and we suggest you to looking in front of the "cross" painted. Once in Montalcino you don?t miss a visit to the Abbey of St. Antimo, one of the most important Italian Romanesque monuments which stands alone in the countryside among olive trees, where you can hear the ancient Gregorian chants. A famous event in Montalcino is the "Sagra del Tordo" which consists of costumed parades, competitions of archers, eat and collective drinking.

San Quirico d'Orcia we reserve the discovery of one of the most beautiful Romanesque churches of Tuscany: ?La Collegiata? which has a magnificent portal of 1080. Worthy of the greatest interest is the thirteenth-century doorway decorated with beautiful sculptures of lions and caryatids which was built by a follower of the sculptor Giovanni Pisano.

This town is in the heart of an area full of famous thermal waters; In fact, Bagno Vignoni, a small village of San Quirico, as well as Bagni San Filippo, on the slopes of Monte Amiata, are an example.

Characteristic of Bagno Vignoni is the steam of boiling water which flows into the "vascone", located at the center of this small medieval village, and those which, flowing, flow into natural pools where you can take a warm bath. Recently, some excavations have unearthed the ancient spa.

Pienza, one of the most beautiful towns of Tuscany owes its name and its beautiful present appearance to Pope Pio II Piccolomini, who was born there in 1405, when the village was called ?Corsignano?.
Pio II, "humanist" Pope, wanted the architect Bernardo Rossellino realized in the center of Corsignano an example of the "ideal city" theorized by Renaissance artists such as synthesis of harmony, perspective and elegance.
Rossellino realize the will of the Client as can be seen from the construction of two great masterpieces of architectural elegance, that are the Cathedral and Palazzo Piccolomini.
Besides the beauty of the architecture, of which another example is the Pieve di Corsignano, ancient Romanesque church, walking along the main street and going inside the picturesque streets that intersect it, it opens our eyes a lovely "Eden" which it is the Natural Park of Val d'Orcia terms like arts and culture are not enough to describe the indescribable beauty.

Monticchiello is a medieval fortified village that has left long part of its walls around, several towers and the great fortress.


Placed on top of a hill, Monticchiello is a window on the Orcia Valley and from here you can enjoy romantic sunsets.

Radicofani, ancient feud of the monastery of San Salvatore, dominates from its 780 meters above sea level the whole Val d'Orcia and preserve historical monuments such as the Romanesque church of San Pietro, that maintain Della Robbia terracotta, and the Romanesque-Gothic church Sant'Agata.
It is recommended to visit the castle that overlooks the town. 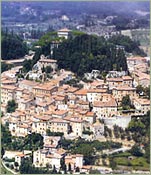 Cetona, place at the base of the mountain, has a typical medieval urban layout with its concentric streets placed around the Rock.

Beyond the well-preserved "Torre del Rivellino", the watchful eye of the visitor not only linger to observe the great monuments such as the Fortress, the Collegiate, but will also discover windows and portals of great artistic value.

Also once inside the country, you will discover the mountains and will be a must going inside at least up to the caves of Belverde, one of the largest centers of the Italian civilization of the Bronze Age. 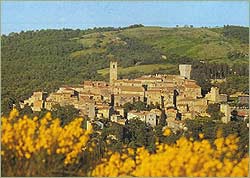 San Casciano dei Bagni, located on the south side of Mount Cetona, is a medieval agglomeration, surrounded upstream by a natural park of oak, chestnut and pine trees, narrow streets and picturesque alleys arranged around the church and the bell tower.
Not far from the center are several sources of mineral waters which are used in part in the Fonteverde spa for balneotherapy and mud therapy, and partly in the ancient "lavatoi", surrounded by greenery, where you can take a hot bath, feeling all in one with nature 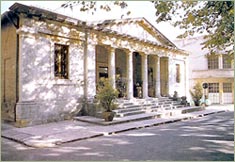 Chiusi, an ancient Etruscan city, is home to a National Etruscan Museum which alone represents a beautiful overview of Greek and Etruscan pottery production, funerary urns and sarcophagi that come mainly from the necropolis that developed around the city. The necropolis is known for tombs excavated into the tuff, among which the most important are the Tomb of the Monkey, the Colle Casuccini, the Grand Duke, the Pilgrim and many others. Also you can visit the "Porsenna" labyrinth, an intricate network of underground passages leading to the cistern that dates to the first century d.c.
In addition to culture, there is the possibility of walking throw the natural oasis of Chiusi Lake.

Cortona, from its elevated position, enjoys a full view and wonderful on the Valdichiana and Trasimeno Lake, ranging up the Umbria-Marche Apennines to the northeast and to the south, as far as Monte Amiata. The best prospect you from the heights on which once stood the Etruscan Acropolis and on which today stand the bastions of the Medici Fortress and the building of the Sanctuary of Santa Margherita.
Cortona was a flourishing center in Etruscan times and its Etruscan Academy Museum houses one of the most famous bronze artifacts of the heyday of that civilization. Nearby there are important tombs: the Tanella Pythagoras and Tanella Angori.
The medieval period preserves the appearance and the urban layout, but the major buildings were reconstructed in 400 and 500.
Wandering among the narrow streets and passing under the arches that connect the houses of stone, you can have a lively impression of the atmosphere of a city of 200 and 300. Repubblica and Signorelli Square are communicating and spectacularly enhanced by the Town Hall and Pretorio Palace. Also important is the Diocesan Museum with paintings of the best artists among those: l'"Annunciazione" from Beato Angelico and the "Deposizione" and "Comunione degli Apostoli" from Luca Signorelli. 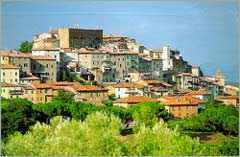 Chianciano Terme, spa resort with mineral water enriched with highly curative action, is free from serious pollution data problems. This spa is in fact surrounded by wooded hills, maintaining the place pure, represent the best safeguard of the ecological and hydrogeological system. In fact, all around, one gets the upper course of the river Astrone surrounded by large forests of oaks, beeches, chestnuts and immediately behind, the magic and polychrome Val d'Orcia. Here along the authentic Tuscan atmosphere, you can still admire bastions, fortresses and castles, living testimonies of history and culture.
It's just that the environment around the healthful mineral springs of Chianciano. This town is shown to spend days relaxing walking in three wonderful thermal parks.

Hotel "I DUE CIGNI" is situated in S. Albino, amongst the green Tuscan hills and is managed directly by the owners.